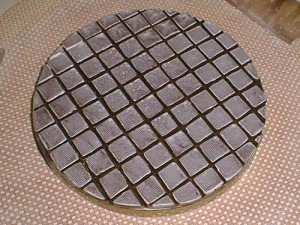 I read with interest an article in The Midwest Faceter, Sept. ’93 called “When All Else Fails”, about polishing the table of a topaz stone which another cutter had made parallel to the cleavage plane. The writer, Nat Cohen, from Dartmouth, Nova Scotia, had tried everything without success before remembering his telescope mirror polishing experience. Telescope mirrors are commonly polished on a pitch lap, or “tool” as they call it. He used what he called “roofers pitch”, softening it with a little beeswax. These are melted slowly in a pot until in fluid condition–about like pancake syrup–and poured into a flat disk-shaped mold with a lip around it to hold the pitch until it cools.

Back in the ’50s I polished at least eight telescope mirrors while making telescopes. I obtained the mirror blanks (kits) from Edmund Scientific; the kits contained enough Canadian Balsam pitch to make the laps for polishing. I think you can still get good clean Canadian Balsam pitch from that company. I don’t remember about adding beeswax to soften the lap, but I do remember cold pressing the lap to make it conform to the curvature of the mirror. This has to be done periodically during the polishing stage. Since I was working days, I polished in the evening, then left the mirror sitting on top of the pitch lap overnight, during which time the pitch would creep until it contacted the surface of the mirror evenly all over. I scored the lap with Vee-shaped grooves in straight lines about one inch apart, which divided the lap up like a checkerboard. The grooves were 1/8 inch deep. Polishing was done with a thin slurry of cerium oxide. The grooves drained off the excess slurry so that the glass surface of the mirror contacted the lap’s surface instead of hydroplaning.

For a gemstone lap, you can use a any stiff base material the same diameter as your other laps. Make a dam around the edge to contain the melted pitch, heat the pitch and pour it into the mold. It should be hot enough to fill the mold and level itself off, but not smoking hot. Be careful! It can catch on fire! It is safer to do it out in the yard somewhere. After it has cooled completely, remove the edging. Nat did not describe how he scored the lap, but he did mention using a thick plate of glass to cold press the lap, taking about 4 hours to do in average temperature. On a warm day it would take maybe half as long. Nat coated his plate glass with aluminum oxide so as to embed it into the pitch. I did not do that, but it should get the polishing action off to a faster start. Nat did claim that he got a beautiful polish on that topaz table facet, so if you run into a similar problem, give the pitch lap a try.

The only thing I disagree with in his article is his attributing the polish to a Bielby layer. Hogwash! If the stone surface even got hot to your touch it would be enough to ruin the lap surface. In polishing a mirror the lap is stationary. You move the mirror by hand back and forth across the lap. No heat worth considering is generated. The same should occur on your faceting machine. Run the lap as slowly as possible or move it by hand. The stone or lap should not even get warm or the lap will deform.