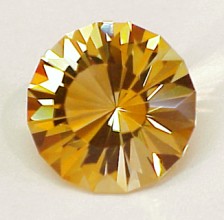 Shown at right is a 14mm Simple Jack cut from Bolivian citrine using 39 degree crown breaks and 35 degree petals. It weighs about 9.3 carats. This pretty Simple Jack was cut by Old Pueblo Lapidary Club member Alan Gerzoff as his first stone. Alan is planning on mounting it as a pendant for his wife.

Simple Jack was developed as a teaching design suitable for club class work and as an introductory project for beginning faceters. I was inducted via a standard round brilliant, but given certain criteria and goals, I think this design is more suitable for class work. Despite its 16 fold symmetry, Simple Jack has eight less facets than an SRB, and is much less demanding in terms of fledgling abilities at cutting accurately to meet points.

The majority of faceting students in the Old Pueblo Lapidary Club beginning classes are unable to complete a SRB as a first project within a class schedule that provides six, once per week evening sessions, and OPLC’s faceting class waiting list provided an incentive for developing an alternative to the SRB as a first project.

Due to it’s simple, single course pavilion, this design also offers excellent disaster recovery due to misindexed or drastically overcut break or petal facets on the crown. In the event of a crown side cutting disaster, the stone can simply be made a little smaller by chopping down on the girdle facets and repolishing them, without concern for destroying the main-break-girdle meets on a conventional SRB pavilion, and the student can just have at it again. This recovery process can be continued by the disaster prone until the stone becomes reduced to the diameter of the dop it’s mounted in. Or smaller, from the looks of some of the dops at OPLC, but please, just don’t do that. 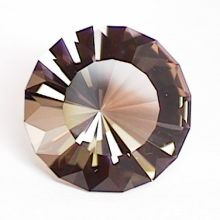 Because Simple Jack incorporates no star facets and employs a course of simple petals for the crown mains, this design also helps minimize problems due to cumulative errors in the meets, which can get pretty nasty on a beginner’s stone in the area of the star facets surrounding the table on an SRB.

In spite of its simplicity this design is not wanting for looks. The use of staggered main crown and pavilion facets yields some nice scintillation and reflections, and the COS and ISO brightness returned by GemRay at zero tilt for quartz is 85.3 and 89.2 respectively. I have cut several variations of Simple Jack using other crown angles, and although the brightness is reduced, the nicest looking stone to my eye so far is a 14mm cut from clear quartz using 39 degrees for the crown break facets and 35 degrees for the petals. 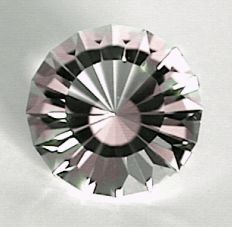 Shown at right is a Simple Jack cut from clear quartz. It is 14mm in diameter. This stone uses 39 degree crown breaks and 35 degree petals. The color was picked up and reflected from the stone’s surroundings.

The higher angles produce a superior play of reflections and scintillation that I think more than compensates for the reduction in brightness. Don’t be afraid to raise the crown angles above the 29 and 25 degrees specified in the cutting diagram, especially if you’re cutting from clear or light colored material.

This design will have a nice appearance with less than perfect meets and alignment provided at least a fair polish is applied. Beginners cutting Simple Jack can have reasonable expectations of producing a “keeper” for their first stone which could be mounted in a finding as a pendant or ring if they are proud of their work and want to show it off.

Simple Jack Cutting Notes
Use of a 32 index is recommended for a first stone, although Simple Jack can of course be cut on a 64 or 96 index if a 32 is not available. With a 32 index there’s simply less positions and less opportunity for making an indexing error. Using a 32 index, all the facets are cut using all the even numbered positions except for the crown petal facets, which use the odds. Doesn’t get much easier and simpler than that. Cutting tables for 64 and 96 indexes are included at the end of these notes for convenience.

The smaller the stone the faster it can be completed, but also the easier it is to overcut, which slows things down. A target size of around 10mm in diameter is suggested for a first stone. Of course that may get smaller without much harm if there’s overcutting problems until the “cut a little – look a lot” sequence is imprinted. A 12-14 mm stone would not be out of the question for a first project if decent laps are available. The largest Simple Jack I’ve cut has been a 15mm smoky quartz and the design wears well even at that size. The following cutting and polishing sequence is suggested for new faceters:

The selected piece of rough should be trimmed down with a saw until roughing in on the lap is a reasonable proposition. A flat is established for dopping by simply holding the rough to a cutting lap and grinding a temporary table, adjusting the angle and position by hand.

Using something in the neighborhood of a 600 grit lap, the pavilion mains are then cut to a permanent center point, and then the girdle facets are cut level and meeting with the pavilion facets. Repeat through both prepolish with a 1200 lap and polish with cerium oxide, assuming quartz is being used. When the prepolish stage on the girdle is reached, things can be sped up a bit by setting the elevation angle to 89.5 degrees or so instead of 90, only preparing and polishing the small portion of these facets which will remain after the crown break facets are cut.

Transfer to a cone dop and align.

Using something in the neighborhood of a 360-600 lap, the crown break facets are cut next, progressively working down the height of the girdle facets and checking for a level girdle. If the girdle line is not level due to an imperfect transfer or machine idiosyncrasies, appropriate cheat is progressively applied during this step to level the girdle on the way down. Once any needed amount of cheat has been determined and the girdle is level, it is cut down to an eye pleasing proportion in the neighborhood of the proverbial 2 percent of the stone’s overall height. Leave any cheat applied here for the petals too.

The crown petal facets are cut next. These will cut in relatively quickly, and using a 1200 lap at slow speed will help avoid overcutting the petals, maybe even turning off the machine during the final meetpoint approach and sweeping the stone on the lap entirely by hand. The breaks and then the petals are polished.

Install a 45 degree dop fixture and align, assuming the machine requires one.

Cut the table, using a lap which is appropriate to the size of the stone and amount of material to be removed. The table should be leveled on the way down, applying any appropriate cheat to make the radial lines on the sides of the petal facets eyeball equal all the way around. When the table has been cut down to approximately 50 percent of the diameter of the stone and is level, stop. Prepolish and then polish the table.

Remove Simple Jack from the dop, clean off any remaining wax or glue, and admire. Pretty nice, huh?