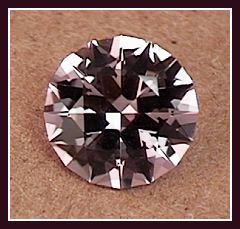 The standard round brilliant was developed by diamond cutters and is used extensively in that industry. This enduring design and its variations are widely used by commercial and hobbyist faceters for cutting many materials, and the SRB is often assigned and recommended as a first project for beginning faceters. Shown at left is my first stone, a 10mm SRB cut from some Bolivian amethyst. I cut it in an Old Pueblo Lapidary Club faceting class. The above diagram and table show the pavilion and crown angles which were assigned in class and used on my first stone.

One might think that the angles used to facet a ‘standard’ round brilliant would be ‘standard’, but in fact they can and should be changed according to what you’re cutting and what characteristics you want or need to maximize. Many authorities consider 41 degrees too low a pavilion angle to use with quartz (which has a critical angle of 40.49 degrees), and advise keeping the pavilion mains several degrees above the critical angle. Pavilion facets cut below the critical angle will ‘window’ instead of reflecting light, which is generally an undesirable effect in a gemstone. One often sees 43 and 45 degrees published as recommended angles for the pavilion mains and breaks of a quartz SRB, especially in older literature. Approaching the critical angle increases brightness, and there seems to be a trend in more recent designs for quartz towards the use of pavilion mains in the 41 to 43 degree range.

Some would also consider the crown angles given above to be on the low side, and angles in the neighborhood of 47, 42 and 27 degrees for quartz SRB crown breaks, mains and stars respectively are frequently recommended in the classic literature. Use of lower crown angles produces a brighter stone, but not without compromises. Dispersion, the differential refraction of light of different wavelengths, is what causes the play of color or “fire” in a gemstone. As the crown angles are lowered, the exhibited dispersion tends to suffer. The pattern and play of reflections and scintillation can also suffer as the crown angles are lowered. Life is a compromise, eh?

There is seemingly endless discussion and debate on the ‘best’ angles for quartz and of course other materials with different refractive indexes. ‘Best’ and ‘Brightest’ are not necessarily the same thing. If you want to see something really bright, just turn on your MAG light and look directly into it for a couple of seconds. Bright perhaps, but all in all, not very interesting!

The bottom line on which angles are ‘best’ is dictated by your rough and what you want the stone to look like. If you have dark rough, you are ‘cutting for color’ and the main thing you need to be concerned about is keeping the stone shallow so it is not too dark. Use lower crown and/or pavilion angles to reduce the depth of the stone and to increase its brightness. On the other hand, if you’re cutting clear or pale colored material, you want to maximize the dispersion and/or deepen the color. Employ higher crown and pavilion angles to achieve that.

If you are cutting a precious material and the shape of the rough allows a higher crown, you may want to gravitate in that direction to maximize the yield. On the other hand, if you discover you’re a little short of material on the crown side after cutting the pavilion and transferring, the necessity of that situation dictates use of lower crown angles.

There are no hard and fast rules on selecting your angles. What looks great on a CAD raytrace does not necessarily translate into a great stone. There simply is no magic bullet or universal set of angles that works optimally for all materials and degrees of color saturation. Several authors have proposed and recommended “universal angles”, which are at best “close enough” approximations and generalizations stretched thin. Why settle for “close enough” if you can make your stone better? Isn’t that what the art of faceting is all about?

Rely on your own experience, common sense, a little experimentation, and the dictates of your rough to determine the best angles for your stone. If you experiment a bit, I guarantee it won’t take too many stones before you develop your own opinions and intuition regarding the matter of choosing the best angles.