Marcus Beale and I took adult continuing education classes together many years ago at Central Virginia Community College in Lynchburg not knowing that we shared another interest outside of the classroom.

It was after Marcus and his wife Marie opened up a retirement business – the Amherst County Rock Shop – that we found a common interest in rocks and gems. I am a geologist, and Marcus and Marie had a life long interest in gems. At that time Marcus was well along his way of teaching himself to becoming a professional gem cutter using an Ultra Tec faceting machine and I was struggling to make my used Graves Mark IV faceting machine work better. The Lynchburg Gem and Mineral Society was in its rebirth and looking for articles for its journal, so I volunteered to pen monthly articles documenting my learning curve. Marcus also contributed ideas that he discovered which made faceting more profitable.

The “Scratches from the Master Lap” articles led to a series of experiments with tuning and improving my Graves. I had some early successes with a gravity feed modification that required the “sound-of-cutting” technique. Later, I added a spring loaded Dial Indicator, a “soft stop” depth cutting guide, that led to an understanding of the problem of mast flexing. Inspired, Marcus experimented with his Ultra Tec. These improvement attempts were made on mast type faceting machines with a lock or “hard stop” on the protractors to end the cutting at “precisely” the same angle and depth for a series of identical facets. Note that the mast must flex some slight amount when any “stop” is touched. The problem is that the mast flexes an unknown and therefore uncontrollable amount from facet to facet thus over cutting some facets while under cutting others especially when variable hardness facets are cut. In addition, the angles of the facets vary as the mast tilts different amounts; cheaters are often needed to find and polish these non-identical facets. Good faceting becomes a labor intensive, time consuming, and sometimes a nerve-racking procedure.

Marcus and I considered building an electric light and later a Light Emitting Diode system on the protractor “hard stop” to control mast flex and depth of cut. (The LED system lights up faster and is more accurate because it does not wait for a filament to heat up.) Construction consists of making electric contacts where the “stop” touches – one contact is insulated from the faceting head and the other one grounded to it making a simple on/off circuit. I didn’t build either one for the Graves because I saw its limitation: once either type of light begins to burn you have already cut past its indication – you can’t stop cutting soon enough or reliably enough: the mast still flexes a variable amount. Marcus, in trying to understand what else that was going on with the light approach, hooked up a Volt Ohmmeter to the electric contacts to observe what happens electronically. What he discovered was that the Ohmmeter needle makes a full sweep of the dial as the contacts begin to touch. The variation of electrical resistance is measured by the Ohmmeter in the very tiny area where the contacts begin to touch: the Ohmmeter’s needle moves to the right as the resistance goes to zero. A very soft – “soft stop” was born. The mast flex can be controlled!!!! The mast is flexed a reproducible amount by stopping the cutting each time at the same mark on the dial. 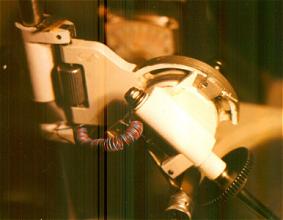 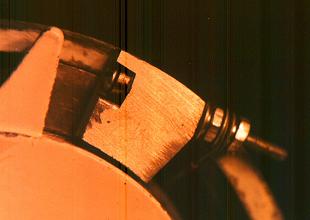 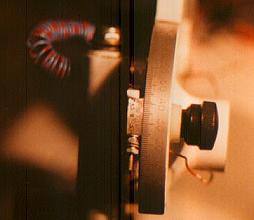 I quickly added an Ohmmeter to my Graves. Now, Marcus and I cut exactly the same depth and angle from the initial facet through all the identical facets in a series! With the Beale/Woolley Depth of Cut Indicator we can push the stone into the lap at whatever speed of cutting the gem will tolerate, and slow down the cutting as the needle approaches a chosen mark on the Ohmmeter dial. Reproducible depths of cut and reproducible angles are achieved by holding the gem at that identical elevation above the lap and waiting a couple of seconds for the cutting to finish – as evidenced by the sound-of-cutting. We “cut a little-look a lot” to properly locate the first facet. The rest of that series of facets is “cut a lot” – we don’t waste our time looking at the gem! The numbers on the dial are unimportant. We watch the needle approach a chosen meter mark – close to zero resistance on the right side of the dial. The exact meter value is unimportant because the meter is far more precise than the protractor. The first facet of each group is cut to meet point perfection close to the zero resistance mark on the meter. Then we cut identical facets by holding the gem at that same mark. If a facet is accidentally over cut a little, all of that group of facets will need to be re cut to that new value to maintain symmetry. If a facet is over cut to the zero mark, the mast again begins to flex an unknown and uncontrollable amount: re-cutting is then necessary.

The Beale/Woolley Depth of Cut Indicator has the following benefits:

2.) It eliminates the over cutting/undercutting problems caused by the variable hardness characteristics of each gem species.

3.) It greatly increases the accuracy of meet point or other faceting techniques.

5.) It cuts girdles to a uniform thickness; perfect rounds are the rule, rectangular facet edges are parallel, and fancy cuts are symmetrical. (Well, not quite perfect… but it is more fun to find the cutting flaws with a 20-power magnification than by “eyeball”.)

6.) Except for orienting a damaged gem for re-cutting, or radially aligning the crown to the pavilion after a transfer, cheaters are no longer required.

7.) Faceting machines can be adjusted and realigned using the device.

Non-mast type faceting machines can also be fitted with the device. The Beale/Woolley Depth of Cut Indicator has been added to the Ultra Tec, the Graves, the Raytech, the Facetron, the MDR, and home made machines. Jon Rolfe has incorporated the Beale/Woolley Depth of Cut Indicator in the design of his excellent new faceting machine, the J-2, which is intended for home construction. Most applications are made with just the addition of an insulated electric contact at the protractor stop.